I think it’s worth pointing out before I start talking about the game that I have little to no interest in sports and have no prior knowledge of motocross other than knowing it involves Motorbikes…and mud…..lots and lots of mud. My lack of interest in sports has never stopped me enjoying sports games (I’m pretty awesome at Tony Hawks Pro Skater, if I do say myself) and I expected this game to be no exception. When I was given the opportunity to review Monster Energy Supercross I jumped at the chance, the trailers online made it look gorgeous and flying through the air and pulling tricks looked like great fun! To an extent, this is true of the game but it takes a long while to get to that point and it isn’t the kind of fun that everyone will be looking for. 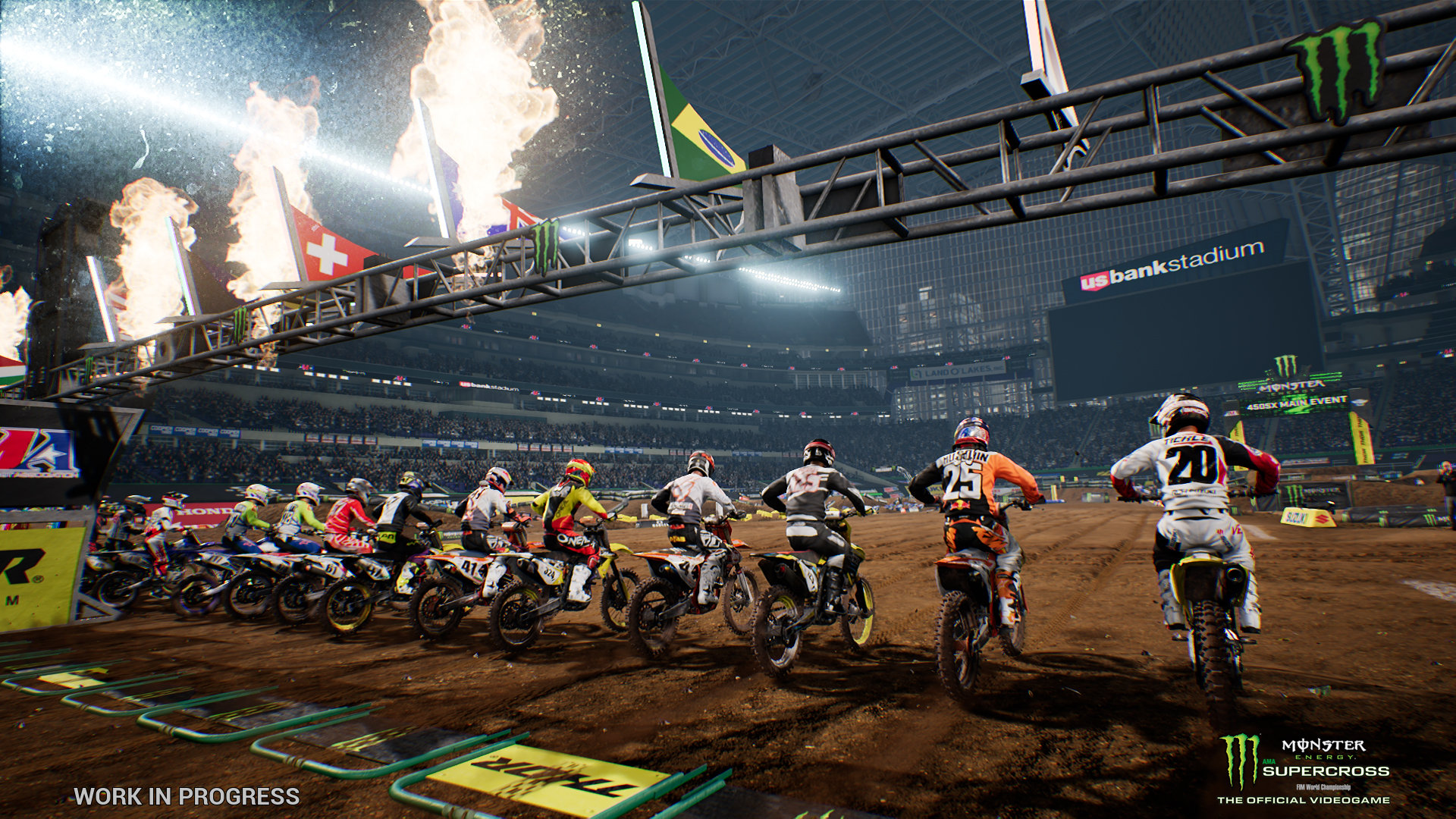 Part of the reason Monster Energy Supercross takes time to get used to is the complete lack of tutorials that is offered, right from the get-go. The game literally tells you nothing and throws you in to your first race before it even shows you a title screen! You start the race at the gate with no explanation of how this mechanic works and fly off the line while attempting to read an in game HUD showing which button does what, all the while trying to avoid 21 other riders and win the race. Needless to say, myself, and likely countless others did not do particularly well. Jumping straight in can be a really fun way to learn the mechanics of a game but when it comes to racing games, practice makes perfect. There is something a little soul destroying about basically having no choice but to lose your first race, it leaves a bad taste in the mouth before you have even started.

The tutorials don’t particularly get much more in depth from there. There is a brief section in which certain game tutorials can be viewed but there is nothing to explain the various modes and how they work. Most modes are self-explanatory although there were some areas of the career that I didn’t understand and almost missed had it not been for clicking every option just to see what they do. The controls are smooth and laid out well, with buttons to control acceleration, clutch, front brake, rear brake and the right stick can be used to shit the rider’s body weight in a given direction. Although the controls feel tight, a tutorial with a few tips on the best positioning for the rider or which brake to use when would have gone a long way. As well as the standard controls, the game also has a rewind button, allowing players to reverse time for a few seconds, meaning a bad corner or a miss-timed jump does not mean losing the race. This feature is great to use but the problem is, there is no penalty for using it and there is no bar or meter that needs filling before it can be used. This means that players like me (who are terrible), can basically use it on every corner if they choose. This is an odd choice as a game feature and not something I have seen used in this way before….and I’m not convinced it works.

As for modes, the career mode takes up the bulk of Monster Energy Supercross and involves creating a custom character and bike and racing for glory and in-game currency to use on better bikes. The create-a-character mode is a bit of a joke, with only 10 options of rider with various skin tones and slightly scary faces and the ability to change gear. Due to wearing a helmet, the only real way to change the appearance is to change the gear and they all look so similar, it felt a tad pointless. Another observation is the lack of options to change gender; again, I know little about the sport but a quick Google search tells me that there is a women’s motocross championship so an option, even if in a separate mode, would have been nice. Once a character has been created, players can race either east or west divisions, starting with 250SX classes before moving up to the 450SX division. Each race can be modified by adding qualifiers and there are options to take on sponsors but if I’m honest, it was so scarcely explained, I didn’t really understand what I was doing. Along with the career mode, there is an online multiplayer mode, although strangely this seems to have no matchmaking and very limited options, which in my experience, had me racing with much more competent riders compared to little-old beginner me. This was hugely daunting and put me off wanting to venture into the online foray until I am a much more competent rider. As well as the racing modes, the game has a relatively in depth track creation mode, allowing those with a creative flair to make and share tracks online helping to add some longevity.

Upon receiving the news I am to get a review code, I always take a look at a game trailer just to get a feel for the game in general. One thing that stood out when viewing trailers for Monster Energy Supercross is how jaw-droppingly gorgeous it was. The visuals were pin-sharp and the lighting really felt like and indoor arena, casting shadows into the mud, which itself was beautifully detailed, spraying realistically as the riders sped round corners and off jumps. Unfortunately, these videos must have been taken from a very high spec PC as this just didn’t translate into the PS4 version I reviewed. The graphics were far from poor, but the sheen of the trailers was not carried over to the console version. Some of the detail was still there, the riders clothing flaps in the wind and the mud effects are still good, but only good, as opposed to great as shown in the trailers. The crowds and backgrounds also looked a little rough around the edges, as the detail was clearly saved for the tracks and riders rather than the game as a whole. The game also suffers with some laggy sections when too much is going on, which is forgivable now and then but in my experience, happened on most races. The main section the game seems to struggle with is the first corner, and most races I took part in would stutter as all riders made the first bend. It isn’t exactly a deal breaker but it does mess with the flow of the game and can be quite jarring when it happens.

Overall, Monster Energy Supercross is not a bad game but I feel it is aimed at hard-core fans of the sport, rather than appealing to those who just want to have fun with it. The game goes for realism unlike other over the top sports titles with cartoony physics, but in the process, takes some of the fun out for those have little knowledge of the sport. Definitely worth picking up if you want a realistic motocross simulator with a meaty career mode but probably better to pass if you prefer pick-up-and-play fun.

Monster Energy Supercross is a solid racer for fans of the sport but doesn’t bring enough to the mix to tempt more casual gamers.

I'm a retro game collector with a love of all things geeky. My major passion is gaming which I have been doing for a long time and I can't wait to see what the future of gaming holds!